Join my newsletter list to be the first to hear our latest news!
... summer recipes and gourmet delicacies are exceptionally well-known all over the world... bruschetta is one of the greatest Italian summer dishes.
Jump to Recipe Print Recipe

The origin of bruschetta is very old, in fact, there is no certain information regarding the birth of this snack.

Although everyone says that the origin is from Campania, it seems that bruschetta appeared in the kitchens of Tuscany and Lazio as well. Bruscare, which means to burn, in fact, also belongs to the primitive Roman / Lazio dialect.

Imagine that the origin of the bruschetta is so ancient that oil was used in it for the first time was by the Etruscans.

Bruschetta, was born as a snack for field workers, where it is characterized by the presence of fresh tomatoes, oil, garlic, and sometimes oregano.

In the different Italian regions, bruschetta,which is a slice of toasted and seasoned bread, is called different names in other parts: “fettunta” in Tuscany; “Soma d’aj” in Piedmont, name deriving from the load of donkeys (soma) and garlic (aj); “Fedda ruscia”, that is “toasted slice”, in Calabria.

Arriving today, the bruschetta has been enriched with ingredients and variations, while keeping the base of toasted bread as a staple. 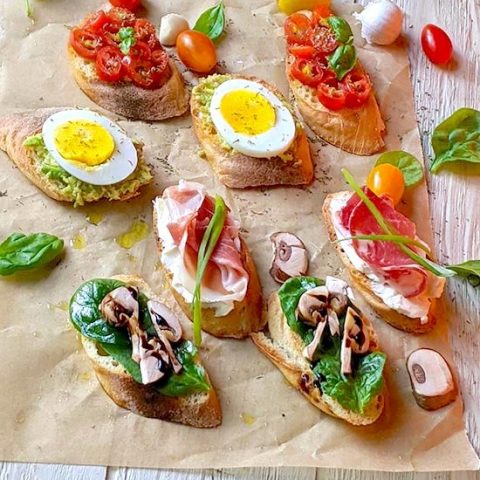 The Colorful World of Bruschetta

Bruschetta with egg and avocado cream

Bruschetta with prosciutto or capocollo and cream cheese

ENJOY!
Keyword Bruschetta
Tried this recipe?Let us know how it was!