Join my newsletter list to be the first to hear our latest news!
The sweetened almond filling frangipane, commonly known as almond cream, is a flexible component of the classic pastry kitchen.
Jump to Recipe Print Recipe

The frangipane cream is composed of almond flour combined with sugar, butter, eggs, and aromas which can be added.

Frangipane cream is a common cream widely used in pastries to fill pies, cakes, and pastries. It is similar to pastry cream, but with a grainier texture due to the almond flour.

The almond flour and the butter guarantee a soft consistency to the filling, even after cooking.

The origin of the frangipane cream is unknown, there are many versions:

1) like many other sweets of Italian origin, it was brought by Caterina De ‘Medici to Paris, after her marriage to the future king of France.

2) According to the Larousse gastronomique in the 17th century, in Paris, an Italian perfumer named Frangipani created a new perfume based on bitter almonds. This essence inspired the pastry chefs of the capital to make a cream called frangipane, in honor of its original creator.

3) According to a tradition of the Franciscan family, the origin of frangipane is supposedly linked to Giacoma de Settesoli, a young widow of the Roman nobleman Graziano di Frangipani, Lord of Marino. She was a friend of San Francesco and she always used to give him almond sweets.

The recipe is very easy to make; the most delicate phase is whipping the butter with the sugar. You can use a planetary mixer if you have it, which makes it easier to get a frothy cream without any lumps. Or you can work by hand with a whisk, but remember to let the butter soften at room temperature before whipping. 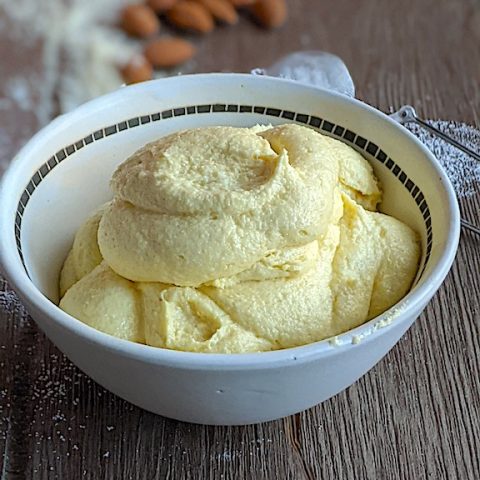 The frangipane cream should be stored in the refrigerator for a few days covered with cling film for food. ENJOY!
Keyword Frangipane
Tried this recipe?Let us know how it was!