This is a recipe inherited from my Aunt Loredana, the Mandarin Pudding, as you may have guessed, is made out of fresh mandarin juice.
I like to use seasonal fruits and March is the last good month for orange and mandarin fruits.

Do not miss this opportunity to make this masterpiece, so hurry to the grocery store because I’m going to show you my way, step-by-step, to making Mandarin Pudding.

March is the month indicating the end of winter and early spring where everything is awakening from its winter slumber.

Oh, by the way do you like this picture?

Sicily celebrates the arrival of Spring in Agrigento with the festival “Sagra del mandorlo in fiore,” the Almond Blossom Festival.
Folk groups, arrived from all parts of the world, performing at the “Valle dei  Templi” (archaeological site) to celebrate the return to life and as a symbol of the awakening is the almond tree in bloom.
Homer tells the flowering of the almond tree with the love story of Acamante and Phyllis.
Acamante went in Trojan war that lasted 10 years.
Phyllis waited all these years for the return of her beloved, but she unfortunately did not see him arrive between survivors, and she died of grief.
The goddess Athena touched by her death decided to turn her into an almond tree.
Acamante returned and learned of the death of his princess and the fact that Athena transformed her into an almond tree, he went to the tree and hug it.

The almond tree, just as Acamante hugged it, flourished. 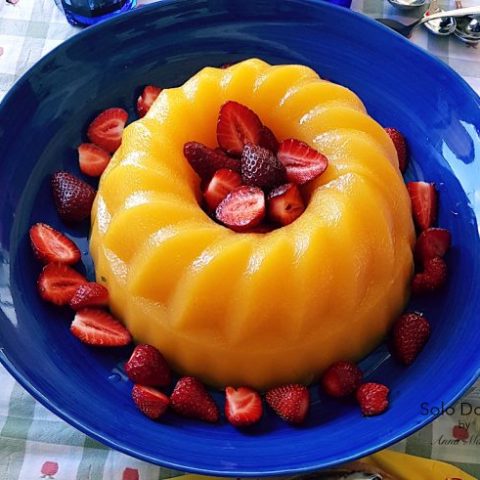 ENJOY!
Keyword mandarin pudding
Tried this recipe?Let us know how it was!