Pancakes with maple syrup are the typical American breakfast on weekends. Pancakes are made with eggs, milk, and flour and are served with maple syrup, honey, or jam but also with fresh fruit. (My children rather slather them with Nutella?).

The legendary pancake recipe was not born in the Anglo-Saxon world and in the USA, but it has, like Halloween and other things, a deep and historical origin.

It seems that the pancakes have come down to us from ancient Greece.

Around 500 BC, Magnete and Cratino (two famous playwriters) even referred to this food in their works.

At that time pancakes were called “teganites“,  it took the name of the pan inside which they were cooked, starting from a mixture of oil, flour, honey, and cheese.

Then they arrived in Northern Europe and finally landed in the United States of America, where today pancakes are the typical American breakfast dish.

Many Greek traditions and recipes have been assimilated by the Romans. In fact, it is documented that the patricians loved the “Alica Dolcia“, a version enriched with the spices of the Greek tiganites and according to ancient recipes no yeast was used (contrary to the American recipe).

The word “pancake”, in itself, is rather unique. It appears for the first time in the fifteenth century, within a document written in, obviously, in English. And since the Middle Ages, this sweet began to be eaten throughout Europe and in Russia.

In the Netherlands, pannekoek is eaten, very similar to American pancakes and served with icing sugar. 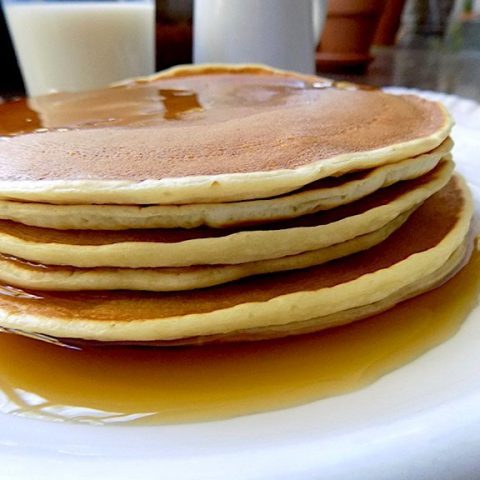 ENJOY!
Keyword pancakes
Tried this recipe?Let us know how it was!