Join my newsletter list to be the first to hear our latest news!
The legendary Sicilian Calzoni Fritti are delicacies from Palermo and surrounding rotisserie, so much so that they compete for the podium with arancina/o.
Jump to Recipe Print Recipe

The legendary Sicilian Calzoni Fritti are delicacies from Palermo and surrounding rotisserie, so much so that they compete for the podium with arancina/o.

You can eat them at any time of the day or night, including breakfast! Inside they are stuffed with ham and mozzarella, with a soft outer layer of golden and soft fried dough.

The process involves a long leavening however I used instant yeast and they came out amazing as well.

Every year in September at the “A. Aniante” Municipal Park in Viagrande, near Catania, the Sicilian fried food festival is celebrated, “la sagra del fritto“.

There will be stalls with many local delicacies: to represent the fried food par excellence there will be arancina /o, iris, raviole, honey crepes, paranza fish, meatballs, vegetables in batter, pistachio desserts, cannoli, fried calzoni, then also a stand that represents the fried foods of Palermo, or Palermo’s street food, and much more. A list, just by scrolling it, already makes your mouth water.

The festival will last three days and, in addition to fried food and street food stands, numerous other events will be scheduled: music, entertainment, shows, and dance, don’t miss this event. 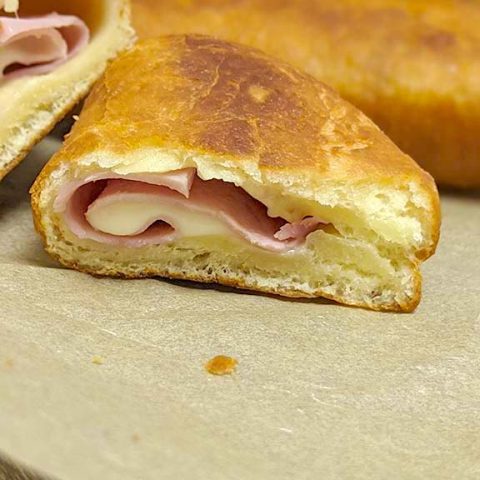 ENJOY!
Keyword sicilian calzoni
Tried this recipe?Let us know how it was!