Join my newsletter list to be the first to hear our latest news!
Paste con le Sarde is a concentrated blend of scents and flavors and staple in Sicilian cuisine.
Jump to Recipe Print Recipe

Pasta con le Sarde is a concentrated blend of scents and flavors and staple in Sicilian cuisine.

On June 14th, we flew to Sicily, and out first stop was my husband’s charming hometown of Cefalu.

Cefalù is a historical and scenic hub (https://cefalu.it/).

Vincenzo Consolo called it “emblematically suffused with Arab and Norman aura,” and it has a highly distinctive historic core where the Cathedral, a lavish work of Sicilian-Norman art, stands out.

I asked my mother-in-law (she still lives in Cefalu`) to make pasta con le sarde before I left for the U.S. In fact, we arrived at her house at noon, and as soon as we pulled up to the gate, I could already smell the fresh fennel.

The second meal was “le sarde allinguate,” which I really adore, but I will discuss it in more detail in a later post.

Despite being created in poverty, as shown through its few ingredients, this famous pasta now achieves the high degree of taste and fame that we are accustomed to from Mediterranean cuisine.

The dominant flavor and scent of this dish comes from the wild fennel, which is in season during the winter and spring. The pasta from the fennel’s yellow cooking water should be added to the long-boiling, shredded fennel. The fennel should then be properly pressed before being gently browned in a big skillet with the white onion and with salted anchovies (1 or 2 fillets per person, approximately).

The well-drained pasta (ziti, or bucatini) is added last.

The sardine is “allinguata,” (roughly translated as “reduced to a tongue”) in the dish, which entails slicing them open like a book. Do you remember le sarde a beccafico? The same procedure!

How did sardine pasta come to be?

It was created by a chef whose identity is, sadly, unknown. The setting is said to be placed between the Byzantine and Arab dominance in the ninth century AD. The whole thing starts when the commander Eufemio da Messina decides to lead the rebels in an effort to drive out the invaders. He has always been opposed to the Byzantine domination. He is unfortunately apprehended and expelled after being charged with trying to convince a nun to break her vows and falling in love with her. It sounds more like a pretext than an accusation.

Eufemio, it turns out, seeks refuge in Africa and, driven by a desire for vengeance, joins forces with the Saracens and commands their fleets to conquer Sicily.

When the fleet touches down at Mazara del Vallo,  The poor chef was compelled to use the items on hand to feed the starving warriors, including those provided by Sicily, such as pasta, sardines, and fennel, and those provided by the Arabs themselves, such as saffron. What was prepared was a really tasty first course. 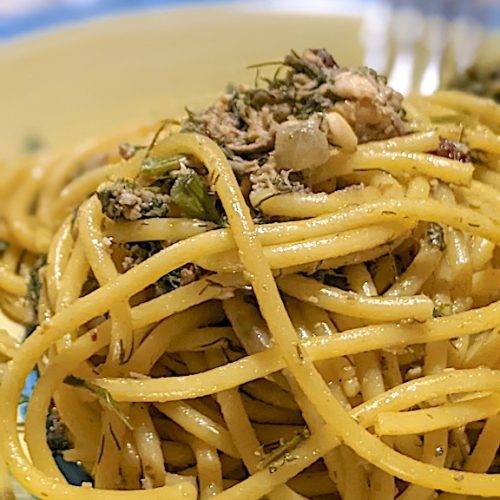 ENJOY!
Keyword pasta con le sarde
Tried this recipe?Let us know how it was!