Join my newsletter list to be the first to hear our latest news!
Vin brulè is a very tasty, hot, and aromatic drink prepared with red wine.
Jump to Recipe Print Recipe

It is customary to consume it in the winter season.

The characteristic of mulled wine is that it is prepared with spices, citrus fruits, sugar, and full-bodied red wine which varies according to the area of ​​origin.

Some parts of Italy prepare mulled wine with white wine.

Mulled wine has many beneficial properties as it is warming, disinfectant, and invigorating. It has a low alcohol content, due to boiling during the cooking of the wine.

In northern Italy, during the Christmas period, it is sold at Christmas markets or distributed free to people during festivals.

At home, it is very easy to prepare and it is a drink that goes very well with wine biscuits, apple roses, or apple puff pastry.

What is the best wine for mulled wine?

Keep in mind that mulled wine is going to have a smell rich in aromas and structure.

In central Italy, they use Sangiovese, while in Emilia Romagna they use Lambrusco.

Other Italian regions, such as Veneto, white wine is used, such as Sauvignon Blanc and Chardonnay.

Mulled wine has origins that can be traced back to a drink used in ancient Greece which then came to the Romans, who called it “conditum paradoxum”. The first evidence of mulled wine is due to Apicius (a Roman gastronome, cook, and writer who lived between the 1st century BC and the 1st century AD) which in “De re Coquinaria” tells of this wine heated and flavored with spices such as pepper.

The use of cinnamon and other spice blends however, diffused during the Middle Ages

In the preparation of Vin brulé, also known as Vin Chaud in French or Mulled Wine in English, the use of the fruit is very important, because when cooking the aromas will be enhanced and the result will be delicious.

The basic preparation is made of full-bodied red wine, sugar, spices (in particular cinnamon, cloves, and nutmeg), and citrus fruits.

If you prefer, you can also add some apple to the ingredients:  cut it into thin slices leaving the peel, and put it in the pot together with the other ingredients   (you can also add other extra spices such as cardamom and ginger). 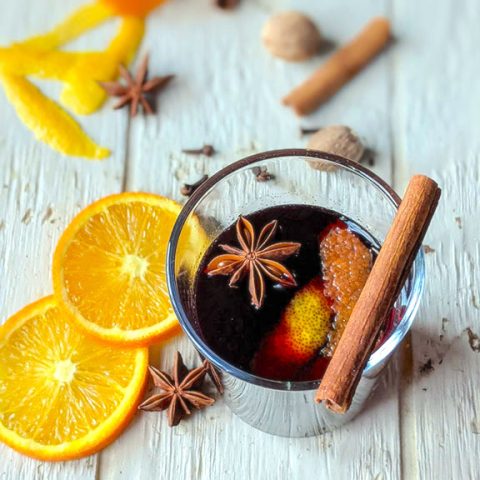 ENJOY!
Keyword Vin Brule
Tried this recipe?Let us know how it was!